I’m Vijay Pandurangan, and I’ve been working with some other super talented folks to help maintain the partychat code, and help pay for its services. Because of the latter, I was especially motivated to keep Partychat’s costs under control!

Recently, Google App Engine made some substantial pricing changes. This affected a lot of people, but especially partychat, a service with over 13k one-day active users.
In this blog post (and a couple of more to follow), I’ll describe various aspects of the pricing change and our ensuing migration from App Engine to Amazon’s EC2, the impact on users, including cost structures and calculations.

For those of you who don’t have the time to read everything, here’s the

Partychat is a group chat service. By going to a web site, or sending an IM, users create virtual chat rooms. All messages sent to that chat room alias are then broadcast to all other users in that channel. Here is an example of two channels with two sending users.

This is what happens from the perspective of our app:

Google’s service calls an HTTP POST for every inbound message to a channel, and outbound messages are sent via API calls.

Before Google’s pricing changes, our daily cost to process messages was about $2/day. Before the new pricing went into effect, I used some anonymous logging information to forecast how much the service would cost to operate in the new pricing regime. 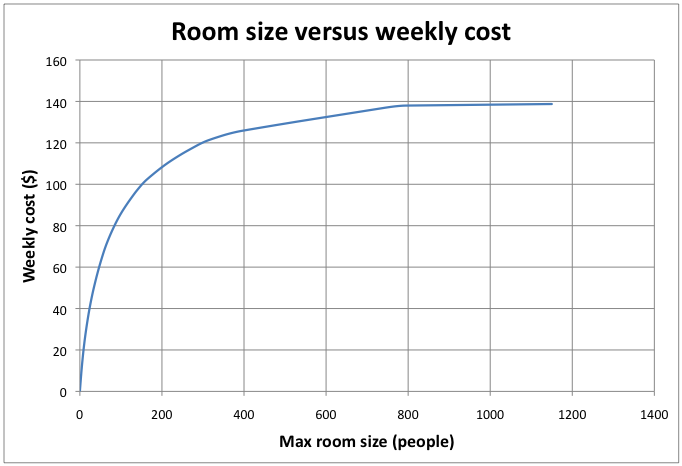 As you can see from the graph, even limiting the maximum room size to 200 people (which would be a major disruption to our services), would have cost us well over $10/day, which is really unacceptable.

Since this was an open-source project I decided to take the simplest approach possible to make this migration. I’d create an XMPP server on EC2 that would simply do all the sending and receiving of XMPP messages instead of App Engine.

Note that as a result of their policy, Google makes less money AND has higher costs! (All XMPP traffic now gets routed through EC2, which is taking up bandwidth on their peering links)

Our App Engine app still does almost all of the processing of messages (including deciding who gets sent which messages), but does not do the actual fanout (i.e. creating n identical messages for a broadcast message). That is handled in the proxy.

In order to run an XMPP proxy, we need to deploy an XMPP server with the ability to federate to other servers, and code that interfaces with that server and receives and sends messages.

There are a bunch of XMPP servers out there, but the overall consensus is that ejabberd, a server written in Erlang (!) is the best and most stable. It’s proven to be extremely stable, and efficient. The big issue is that configuration is really difficult and not very well documented. A couple of important points that took forever to debug:

XMPP supports two connection types, Client and Component. A client connection is what your chat client uses to connect to a server. It requires one connection per user, and the server remembers all the important state (who you are friends with, etc..). This is by far the simplest solution for writing something like partychat, but there are a few problems. It requires the server to keep track of some state that we don’t care about (Are the users online? What are their status messages? etc..) which adds load to the server’s database. This can be solved by increasing database capacity, but this is wasteful since these data are not used. More importantly, using client connections will require one TCP connection per user (see the image below). This means that for our service, with ~ 50k users, our server will need to handle 50k TCP connections. This is already a really large number, and will not scale that well.

The alternative (which I selected) was to use a component interface (see above image), which essentially gives you the raw XML stream for any subdomain. Your code is then responsible for maintaining all state, responding to presence and subscription requests.

Initially we used SleekXMPP, a python library to manage component connections. The state was stored in RAM and then periodically serialized and written out to disk. Since XMPP has provisions for servers to rebuild their state in case of data loss without human involvement, losing state is not catastrophic, though it results in substantially higher load on the system while redundant subscription messages are dispatched and processed. The state that we store currently contains:

The last outbound request timestamp is required to prevent subscription loops in case sequence ids are not supported (the spec details why this is important.)

Each inbound message results in an https request to the app engine server. The server responds with JSON containing a message that is to be sent, a list of all recipients, and the channel from which it is to be sent.

The python library was OK, but did not really operate too well at our scale. Profiling showed that much time was spent copying data around. The server periodically crashed or hung, resulting in dropped messages and instability. The inefficiency required us to use a medium instance ($0.17/hour) to serve traffic, which put us at about $4/day. Still substantially lower than App Engine, but too high!

The server was then re-written in C++, using gloox, libcurl, openssl, and pthreads. Each message is dispatched to a threadpool. Blocking https calls are made to the App Engine server, and the results are then sent via ejabberd. This server is able to handle our max load (~ 12-16 inbound messages per second, resulting in around 400-600 outbound messages per second) at under 5% cpu load on a micro instance (at $0.02/hour).

The system is mostly stable (a lingering concurrency bug causes it to crash and automatically restart about once every 12 hours) and should provide us with substantial room to scale in the future.

Google Apps for Your Domain has grown in popularity recently. This presents us with a problem; in order for XMPP messages to be delivered to users on a domain, a DNS SRV record needs to exist for this domain. Google does not automatically create this record, but messages between google apps domains get delivered correctly (so we never saw this issue with app engine).

Another issue that slowed down development a lot was that some clients (generally iTeleport) send invalid XML over the wire, which cause the python XML code to throw namespace exceptions. This made SleekXMPP even less reliable, and required making code changes in core Python libraries. The C++ libraries handle this gracefully.

In the near future, we will be disabling old @partychat.appspot.com aliases. Other future work includes billing for large channels, and reducing the number of write operations on App Engine.

Working on this project has been quite educational. First of all, migrating a running service with many users from Google App Engine is hard, especially if it uses esoteric services, such as XMPP. Appscale is a reasonable platform that could help with the transition, but it is difficult to use, and may not be fully ready for production. Google App Engine’s insistence on a different paradigm for development makes migration extremely difficult, since moving to a new platform requires rearchitecting code.

An even bigger problem is the fact that some aspects of your system (e.g. XMPP domains) are not under your control. We had to migrate our users to a new chat domain, because Google did not allow us to point our domain elsewhere. This was a huge inconvenience for our users. Since our service is free, it was less of a big deal, but for an actual paid service, this would be a serious problem.

Since pricing is subject to rapid, arbitrary changes, and transitioning is difficult, no system that is likely to become productionized at scale should be written on App Engine. EC2’s monitoring and auto-scaling systems (more on this in a subsequent post) are excellent, and don’t require buying into a specific design paradigm. In fact, moving this proxy to a private server, or rackspace would be quite trivial.

Edit: I wanted to add this, just to clarify my point:
It’s more than just a price/stability tradeoff. The problem is, as an App Engine user, one is totally at the mercy of any future price changes on App Engine because it is nearly impossible to seamlessly migrate away. The DNS aliases can only point to Google, and the API does not really work well on any other platform. So, at any time in the future, one’s service could suddenly cost 10x as much, and one won’t really have the option to move quickly. If one intends to scale, it’s better to never get into that state in the first place, and develop on EC2 instead. If EC2 raises its prices (highly unlikely since computing power is increasing and costs are decreasing), one can always move to rackspace or just get a private server.

It’s of course true that writing stuff on App Engine can sometimes require a lot less engineering work. But the difference is not really that substantial when compared to the possibility of being stuck on a platform that all of a sudden makes your company unprofitable. Changing a running service is very hard. Avoiding the problem by not getting stuck on App Engine is not trivial, but in my opinion the right call.